Watching and listening, there’s so much to be learnt from this simple action. The art of hearing what hasn’t been said – everytime anyone says something, they also don’t say something else – is an integral part of fully understanding what you just heard. Reading between the lines and not just taking everything at face value, I mean, how can we, humans are complex creatures, taking everything as read would be to disregard the full flavour of the human experience.

There’s so much need for us all to pay that bit more attention to the world around us. Friends, family, figures of authority… many of whom are speaking and saying more than what we hear, or conversely, speaking much whilst saying little. In addition to all of this, we also need to listen to ourselves and what we say to others, is it regurgitated words taken from something you heard, how reliable is that information, did you process and clarify before repeating? This is the thing you see, everyone is speaking and it’s terribly easy to get caught up in the “hive”. Voyeurism is all well and good, even a necessity… but, it’s all about what is learnt, processed and acted upon as a result. In this processing, we must be mindful not to allow our own biases to cloud and ultimately redirect and poison the resulting data. For instance, Blonde brought Gundogan to my attention as an asset she’s considering investing in (he was soooo far off of my radar!). Within a few hours, I watch The FPL Wire, who also mention him! By this time, due to the Blonde conversation, I was already aware that he’s a cheap starting MF, who returns decent points in a team who can have explosive xG. Now, my unconscious bias, the fact he’s essentially a defensive mid, automatically pushes me towards immediately discounting him as an option, but, my logic, having reviewed the data that the conversation pushed me to consider, left me finding that my bias is somewhat unfounded, why?! Because, things change!

This shouldn’t be a shock, but, we live in a world of constant change! When you think about it, this is obvious, but, we should all be aware of the well recognised & documented human responses to change & the stages thereof…

Now, because we’re all individual, there’s no set formula that dictates the order these stages are visited in, you will not necessarily visit them all. We should also strive to not get stuck at any of the red/amber stages! We will however, experience at least one of these stages, and it’s all related to our capacity for the following (which not only makes sense in the wider world around us, but on reflection seems to, in my mind, be the collective formula for unlocking FPL success!).

Responsiveness – how quickly can I identify emerging differentials? Gundogan has tallied 33pts in the past 4 GWs, for a £5.4M investment! 😳

Flexibility – Not being afraid of taking a punt or ditching a plan that seemed certain! Jumping on or off assets early.

Resilience – Going with your gut in the face of discouragement by your peers and/or having faith in the long-game of your strategy. Not being afraid of failure and learning from, instead of being crushed by it!

Innovation – Breaking the template and pin-pointing where the smart differential investments are to be made. (eg: Blonde’s Gundogan plan👌🏿)

Adaptability – Recognising the constantly changing environment and continously revising the implementation of plans without rigidly clinging to the original blueprint.

You can probably see by now that voyeurism is not just viewing people, it’s also viewing yourself.

You see, by viewing people objectively, you can see elements of what you have or lack, in their reflection. This is something that is new to me (Am I that arrogant? Overly confident?), but I totally understand how this objective reflection of others can absolutely assist in identifying my brilliance 😁, as well as my flaws, helping me to work on improving both! 😊 Well, I’m about to have some serious viewing of other managers to do, as The EliteFPL Super Cup has been drawn and I’m in Group I!! 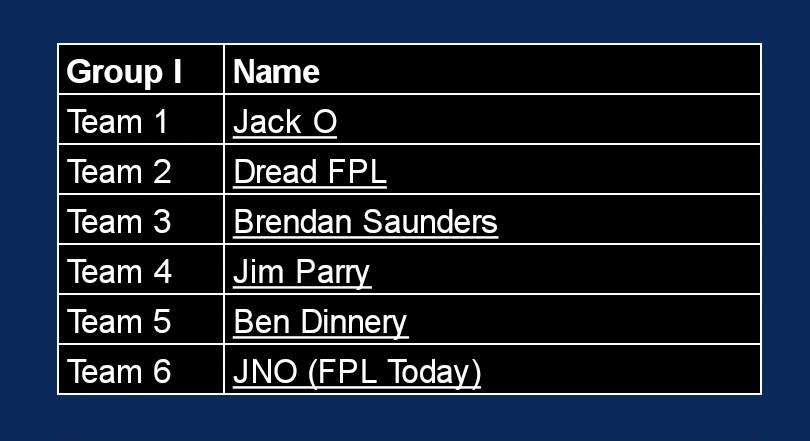 Will this really change anything though?🤔 My goal is still to amass as many points as possible in every gameweek… 😁